PRONOBOZO – NEW ALBUM ‘I WAS THERE’ AND THEIR COMPLETE BACK CATALOGUE OF MIXER STEMS ‘THE STEMS’ DUE FOR RELEASE OCTOBER 26th.

Written by pronobozo on 2013-10-04. Posted in press release, updates. Leave a Comment

Pronobozo, has confirmed the release of his 3rd studio album ‘I Was There’ on October 26th alongside ‘The Stems’, the complete mixer stem collection of his rich back catalogue of work. ‘I Was There’ is one of Pronobozo’s most exciting and accomplished pieces of work to date. Recorded at ZOE Studios, Toronto, the 11 track album is a heart pounding, blood pumping display of energy filled tracks showcasing Pronobozo a master of his machines. Tracks ‘Battle Anthems’, ‘Coming Back’ and ‘Future is Here’ have the Pronobozo trademarked style of caffeine infused beats and build ups geared towards gaming, late night programming, free running, and martial arts.

The title track ‘I Was There’ sees Pronobozo team up with Les Stroud (Survivorman) on instruments with Zoe Holman and Juan Barbosa on vocals pulling together a powerful story detailing the corruption and recklessness of a megalomaniac businessman.

In an interview about ‘The Stems’ release Pronobozo reveals the motives: “With over 10,000 videos on YouTube using our music and 600,000+ downloads from our website alone, I wanted to make sure those content creators and listeners were automatically protected under a Creative Commons (CC) license which would not only allow them to share, remix, and adapt the music but would also allow them to use it commercially. ‘The Stems’ let us go a few steps further by providing the individual mixer tracks from our entire catalogue, this in combination with the CC licenses, we hope, sets a new precedent to the current trends of openness.”

If you have been craving that 90’s electronic music scene akin to The Prodigy, The Crystal Method, or something you’d find on the Hackers soundtrack, Pronobozo brings a similar ‘high tech low life’ vibe to ‘I Was There’. With the success of past hits such as ‘Every Day is a Saturday’, ‘Full Flex’, and ‘Against the Grain’ you can be assured the new album will provide the same healthy mix of electronic styles and energy.

Pronobozo’s album is set for Oct 26th release, previews and pre-orders can be found on iTunes immediately.

SECOND HALF OF BIG ANNOUNCEMENT

Written by pronobozo on 2013-10-04. Posted in community, updates. Leave a Comment

The mixer stems of ‘Hackwave’ are now ready for download. Visit ‘THE STEMS’ section of this website for more details and for the links.

WANT TO REMIX THE FIRST ALBUM?

Want to remix the first album Ze1eE? all mixer stems from all the tracks have been torrented.

Also if you know of any good distribution sites out there for torrents, please feel free to upload.

You can also get ‘The Stems’ from the new section here

FIRST HALF OF BIG ANNOUNCEMENT

FIRST HALF OF THE BIG ANNOUNCEMENT!

From the first pronobozo album Zero = One = Everything I will be releasing ALL the mixer tracks renders (mixer stems) from ALL the songs. Free to use and modify under CC BY SA 3.0. Final sorting and packaging is being done this week, next week there will be seeding of a torrent and finally at some point I’ll have the direct downloads from my website.

NEW ALBUM! PRONOBOZO I WAS THERE | PRE-ORDERS LIVE!

The new PRONOBOZO ALBUM “I Was There” is now live for PRE-ORDERS. Get it TODAY! 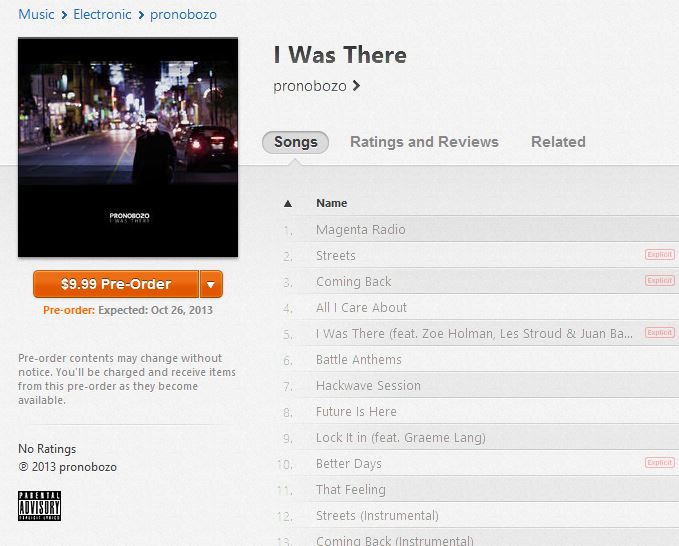 Is it only available on iTunes?

Will it be free?

Yes, after PRE-ORDERS and a grace period the album will be available for free from www.pronobozo.com . It will also be under the same CC license.

Can I get it in FLAC?

Through the online stores FLAC is not an option, but from a request I will be providing FLAC on my website or by torrent in the future, after PRE-ORDERS and a grace period.

What is a grace period?

In this case a grace period is where I try to make money before everything is torrented. hehe.